Ghee turning into butter? Okay there's much more than just this at Shivagange!

54 kilometres from Bangalore and 19km from Tumakuru, there's a mountain peak that ranges to 4,559 feet above the sea level. This is Shivagange, a Hindu pilgrimage centre located in Dobbaspet. This mountain is in the shape of a Shiva linga and very close to it, a spring called 'Ganga' runs with vigour. And that's how this place got its name - Shivagange. This place is also known as Dakshina Kasi because the number of steps leading to the top of the hill are equal to the number of yojanas to Benares. Shivagange has several temples like the Gangadhareshwara temple, Sri Honnammadevi Temple, Sharadambe temple and theerthas like Agasthya theertha, Kanva theertha, Kapila theertha, Pathala Gange etc. On the top of this steep rock, a magnificent Nandi (Bull) is sculpted depicting the brilliance of Indian architecture. The hill was fortified during the 16th century by Shivappa Nayaka and later, Magadi Kempegowda, the founder of Bengaluru, made improvements to those fortifications. 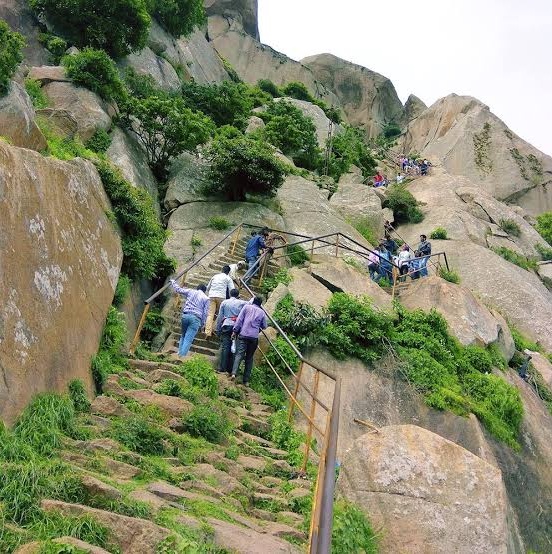 Over 1600 years, there's something interesting that has been happening at the Shivagange temple during the time of abhisheka. This miracle is being witnessed by devotees themselves. When an abhisheka is performed on the Shivalinga with ghee, the ghee turns into butter. Videos on YouTube also depict the priest rubbing ghee on Shiva linga and we can see it turning into butter. It is also believed that the butter has medicinal powers that can cure various ailments. Though it is considered as the miracle and the power of Lord Shiva, exploring reasons behind it hasn't has stopped for over a century now. But no scientific explanation could reach the satisfying mark till date. Many people say that, as ghee is clubbed with little amount of water and rubbed constantly on a stone, it turns into 'butter-like' substance - just like whipped cream, they say that it's whipped butter. Others opine that when ghee is rubbed on a stone like Shaligram, it converts into something like butter and have also demonstrated the same in their houses. Conversion of ghee into butter, though is a chemical change and is thus an irreversible process, it can still be done on industrial level. The theory of emulsification also presents its voice with some limitations to it. On the whole, few Hindus believe that Hinduism itself is a great religion and doesn't require to showcase miracles. While others opine that it's so the power of God and the temple, that butter is given away as a divine blessing to calm the suffering.

It is also said that a secret tunnel extends from the sanctum sanctorum of the temple to the Gavi Gangadhareshwara temple that is at around 50km from this temple.

Another interesting aspect of this temple is that, on every Makar Sankranti, the evening sunlight passes through the arc between the horns of Nandi and falls directly on the Shiva Linga, thus illuminating the main idol located inside the cave. This phenomenon is undoubtedly a testimony for the technical brilliance of the ancient architects.

Shivagange is definitely a must-visit place for its exciting trekking experience. Climbing this mountain is an amazing experience and to beginners, there are man-made steps making the trail suitable for them. The entire trekking path of 2.3km is fun with the end of the path turning steep and narrow as one progresses. While rainy days make the rocks slippery, summers are too hot to handle the trekking. So, the ideal time to visit Shivagange is in winter. To enjoy the breathtaking view from the top of the mountain and to assimilate all the goodness of adventure, spirituality and serenity, get set go to Shivagange the next time you plan a holiday. But while enjoying, be watchful of the monkeys and dogs - they might grab your bag away while you click a selfie!!