Ashamed of menstruation? Or are you one of those who treat menstruating women with difference? This is for you.

Menstruation is a taboo in many parts of the world and when it comes to India, it's not an exception. There are temples in India that have rituals celebrating and honouring menstruating women. Here is where it is clearly depicted how refined and broad was the ancient Indian thinking. One such temple that glorifies menstruation is Kamakhya temple in Assam.

In the capital city of Assam, on the Nilachal hill, there is this deity who is revered as the 'Bleeding Goddess" - the Kamakhya Devi. The temple's coming into existence dates back to 8th-9th century but the present structure of the temple owes much to several reconstructions. The current architecture of the temple is based on the local style called Nilachal. Alongside the main deity Kamakhya Devi, the temple has other goddesses namely Dhumavati, Matangi, Bagola, Tara, Kamala, Bhairavi, Chinnamasta, Bhuvaneshwari and Tripuara Sundari.

Interestingly there is no image, statue or an idol of the main deity in the temple. To one corner of the cave in the temple, the structure of a yoni or vagina of the goddess is sculptured and this is the object of worship or reverence. 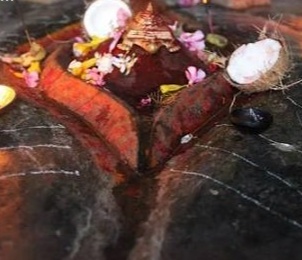 Once, Devi Sati, has gone to attend the yagna performed by her father, who is angry on Sati for marrying Shiva. He did not even invite Sati and Shiva for the yagna. Though lord Shiva asked Sati not to grace an uninvited event, Sati did not pay heed to him and went to the yagna. She was badly insulted by her father who even abused lord Shiva. Unable to bear that, Sati jumped into the fire and ended her life. Lord Shiva raged with anger and resorted to Shiv Tandav, the dance of destruction by placing Sati's body on his shoulders. While all the other gods and goddesses remained clueless about what to do, Lord Vishnu cut the body of Sati into pieces using his Sudarshan Chakra. The places on earth where the cut pieces of Sati's body fell are known as Shakti peethas. Kamakhya temple in Assam is one of these Shakti peethas where the womb and vagina of goddess Sati fell.

The Goddess Who Gifted Kamadeva, his Virility:

Kamadeva is referred to as the God of Love according to Hindu beliefs. It is said that due to a curse, he lost his virility. When he sought out Shakti's womb and genitals and revered them, he was freed from his curse. Thus, the deity of this temple came to be known as Kamakhya. It is also believed that, it is at this place where Shiva and devi Sati had their romantic encounters. As the Sanskrit word for passionate love is 'Kama', the place came to be known as Kamakhya.

While Indian women receive shaming treatment during their menstruation, at Kamakhya temple, it is different. Here, menstruation is hailed as the process that gifts a woman, the ability to give birth. Giving birth is considered as the greatest gift a woman gives to the mankind and such power in her is revered and celebrated as 'shakti'.

In a world where women are treated merely as sexual objects, worshipping and revering a goddess's womb and genitals alongside celebrating the otherwise dishonoured topic of menstruation, Kamakhya temple stands tall for its progressive thought and the message it delivers. Can we also learn what legends and rituals are preaching us instead of just praying and worshipping?