The Insanity of War 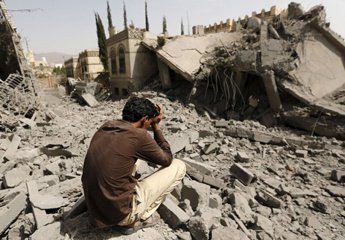 The inhumanity to man by another man
Can be witnessed through the carnage of battle-scarred Sudan
A trip to Jalianwala Baug, Auschwitz or My Lai
Dehumanises Modern Man with scenes that horrify

In Ypres, Somme and Verdun where one man fought another
Beneath the crimson poppies lies the son of one more mother
Kosovo & Khmer Rouge as well as Hiroshima
Represent Mans failings like Yerevan and Rwanda

Phan Thi Kum Phuc – the Napalm girl – her clothes stripped as she ran
If this image fails to haunt you, please look up the Saigon Man
Injured Omran Daqneesh – covered in blood and dust
That a 4 year old must withstand this is terribly unjust

With pro-war propaganda and scant consideration
They justify a needless war which leads to mass cremation
We’ve been through World War 1 and 2, we do not need a third
That Peace is so elusive is senseless and absurd

The man who sells Howitzers is the only one to gain
Despite the kids he’s orphaned, he’ll rejoice and sip champagne
The whopping defence budget can be used for those in need
Flushing cesspits in our mind from hatred and from greed

Srebrenica and Darfur evoke sadness, shock and tears
Have the lessons learnt from Buchenwald fallen on deaf ears
Kalinga was the turning point that made Ashoka see
In war there is no triumph – all war brings is tragedy

If the Caveman was allowed a peep to watch our evening news
I guess he would feel shattered at the extent of abuse
Sarin Gas and TNT – Is this Man’s descent?
A Third World War – Armageddon – the Final accident

We, the people have to rise, determined and united
Condemn this mindless killing that Politics ignited
The "Trail of tears" was heartless, so was the "Wounded knee"
Let’s end this ruthless viciousness and make war "History"

It’s taken 4 millenniums for Man to get this far
We shouldn't let nukes destroy us, let's practise Ahimsa
As John Lennon imagined, let’s live our lives in peace
From all of Gods creations, we’re his Masterpiece.