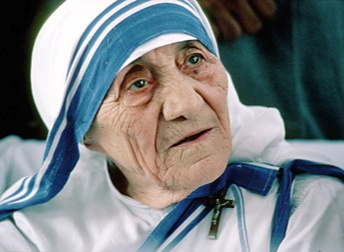 She didn't have a Dior dress and she looked rather plain

She didn't have a Gucci bag to keep  her precious things

All she had was in her heart - she didn't crave belongings

She didn't have Chanel shoes to move from place to place

She didn't have a figure of a supermodel crew

And was frail and thin and tiny, perhaps diminutive too

She's never been on cruise ships or holidayed in France

And she struggled very hard to give the poor another chance

Didn't hesitate to pray and said it didn't hurt to kneel

And believed you were empowered when you held the Rosary

Unlike our politicians who're all for power and fame

This Angel from Albania loved lepers and the lame

To the dying in Calcutta, her touch had meant the world

To the destitute who had no hope, her love she had unfurled

To the wounded in Vietnam who simply lost all hope

Her warm embrace gave courage and they learnt to cope

To the starving in Ethiopia who'd soon be vultures prey

She begged the world to do something, much to her dismay

Those orphaned in Ireland had lost their near and dear

The handicapped in Aussie  had stumps instead of feet

Her compassion reassured  them and they learnt to make ends meet

To the lonely and unwanted whose hearts just seemed to ache

She gave them love and dignity - so they wouldn't break

With gentle words of comfort and eyes replete with pain

She worked in slums and footpaths  politicians would disdain

While some would shrink in horror seeing maggot ridden folk

With boundless faith and courage and a spirit that was strong

She changed the lives of many, while she taught them right from wrong

A statue in her name, was the last thing that she sought

For Saint Teresa of Calcutta was one who couldn't be bought