Lord With No Feet Seen? Know more about this! this

Amidst the greenery spread by the running of river Godavari, 101 km from Vijayawada and 278 km from Visakhapatnam, Sri Venkateswara Swamy Temple is is located on the top of the Seshachala Hill at Dwaraka Tirumala in West Godavari district of Andhra Pradesh. As a saint named Dwaraka identified and located a self-manifested idol of Lord Balaji, this temple came to prominence as Dwaraka Tirumala. The temple was constructed by the Mylavaram Zamindars in 19th century. 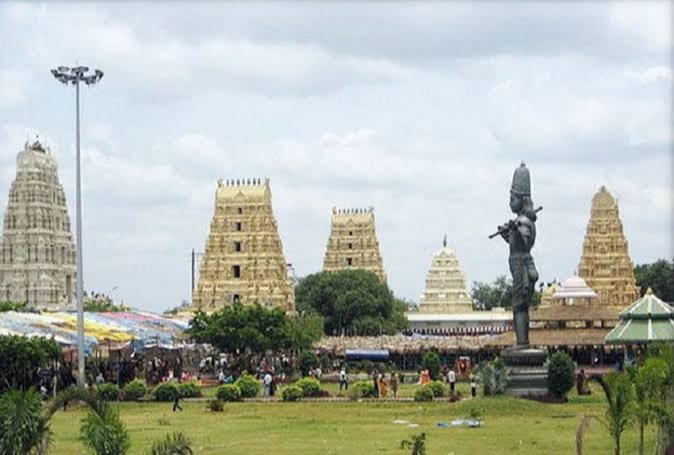 All About The Main Deity's Idol - Stay Tuned To Be Jaw-dropped:

The main aspect of this temple is that, though the principal deity is only one, the Lord Balaji; there are two idols for Him under one Vimana Sikhara. This is a wonder. One idol is the main idol of Lord Balaji as located by Saint Dwaraka. It is just a half statue that has only the upper part of the Lord's body from above the waist with no feet. Legend says that the holy feet are offered to Bali Chakravarthi in Patala loka for his daily worship. Thus, only that part of the lord from above the waist is visible to the devotees while the remaining part from below the waist is imagined to be under the earth's crust. Interestingly, the full idol of Lord Balaji stands just at the back of this main idol. Saints believed that worshipping the Lord is incomplete without revering his feet. So, the saint and social reformer Shri Ramanujacharya, along with others have come forward to erect the complete idol of Lord Balaji according to Vaikhanasa Agamam in 11th century. Thus, in the same sanctum sanctorum, two idols of the same lord are seen. The idols of Goddess Padmavathi and Nanchari are set up in the Arthamandapa.

Reflecting The Magnificence Of South Indian Architecture And Culture:

Dwaraka Tirumala is a perfect blend of South Indian architecture, culture and workmanship. It is built on a hill that appears in the form of a serpent. The main Rajagopuram is 5-storied and faces south while three other gopuras face the other three sides.

Dwaraka Tirumala celebrates the most important festival, Tiru Kalyanotsavam twice a year - once for the self-manifested idol in the Telugu month of Vaisakha and once for the established idol in the month of Aswayuja. The temple celebrates with pop many other major festivals like Swamy Vari Vysakha Kalyanam and Radhotsavam in April–May, Swamy Vari Aswayuja Kalyanam and Radhotsavam in September–October, Giripradakshina in January, Pavithrotsavams in September, Teppotsavam/ Boat Festival in Nrusimha Sagar Tank in November. All these festivals serve splendid visual treats for the devotees, laying before them, the reflections of customs, traditions, culture and history of the place.

Undoubtedly, temples have so much to offer than just spiritual experience and awakening. It's enlightening, soothing and knowledge-giving at the same time, provided we make the best out of them.