Tejaswini Sawant is one of the athletes of the Indian Gold Generation. She belongs to that category of sportsmen and women who are identified within the sports circuits as the competitors with more options to reach the victory. Mrs. Tejaswini is a sportswoman in the shooting discipline who excels in the 50-meter rifle prone competition.

Mrs. Sawant's career dates back to the beginning of the 21st century. She participated in the South Asian Sports Federation Games in 2004 in Islamabad. In this competition, she won a bronze medal for team shooting. She possesses hawk-eyes and precision envied by many.

The lady with the eyes of a hawk has been participating in the international shooting circuit for two decades. She participated in the 2006 Commonwealth Games and in many national, continental and global events. In 2009 she won bronze at the 2009 ISSF World Cup in Munich. Later in 2010, Lady Precision won the gold medal at the World Championships with a score of 597/600, while achieving the world record in the 50-meter rifle prone event: "I wasn't thinking about a medal or a world record... having achieved both, I can't even explain how I feel right now. It's just unbelievable," she said.

Mrs Sawant became the first Indian shooter to win a gold in 2010. That same year she triumphed at the Commonwealth Games in Delhi. At the Delhi competition, she won a silver medal as an individual shooter and a bronze in the 50-meter dash for couples. The accumulated successes led to Lady Accuracy winning the Arjuna Award on August 29, 2011.

Tejaswini hails from Kolhapur, Maharashtra. She grew up in a family of three sisters, a father, and a loving mother. From a young age, she discovered the sport of shooting accompanied by her father Ravindra Sawant who was a distinguished officer in the Indian Navy. She grew up in a navy family and consequently the sport of guns was part of her life since ever. At the age of 13, she started formal training and has been competing in shooting competitions for over 25 years. The year 2010 was a successful one for Tejaswini, however, the grief of her father's death overshadowed the sporting joys. 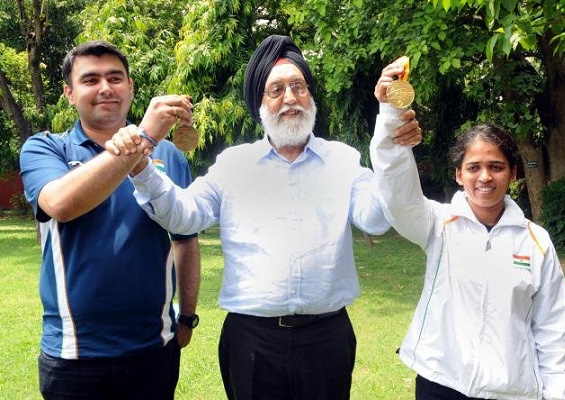 Lady Precision has decades of experience as a sports shooter. She considers her family and her coach, Mr. Kuheli Ganguly, to be the encouragement she has needed to continue on the path of competition, at the age of 40. Her coach designed a program that protects Tejaswini's joints because a 40-year-old competitor's body must protect itself in the most sensitive areas: "What changes with age is our body" ... "I already have knee problems and it is always my priority to keep Tejaswini away from any strenuous training program so she doesn't suffer the same thing," said Mr. Ganguly.

The victories and especially the accumulated experience prepared Tejaswani "Lady Precision" to reach a quota to compete in the Olympic Games of Tokyo 2020. During the Commonwealth Games, 2018, she won the gold and silver medals in the 50-meter rifle. She participated in various championships during 2019. The most important of all events was the Asian Championships in Doha where she earned a place to represent India at the Olympic Games: "I was there shooting like I would in any other competition ... Only when I heard the announcement after I made the final, I realized that I had won a quota place." She said.

Mr. Ganguly, accompanied Lady Precision during the 2012 Doha games when Tejaswani failed to qualify for the Olympics and was relegated to 28th place in the competition. During the Doha 2019 event Lady Precision was not accompanied by Mr. Ganguly, but he was with her in thought: "She managed to keep her composure remarkably well on that day, not too excited and not too low and it was the perfect balance to be able to shoot safe scores".

Lady Precision adapted to the Olympic team of young Indian talents, who enter the shooting competition circuit with the enthusiasm and drive of youth. From them, Tejaswani learned that life is about enthusiasm and excitement, but they learn from Tejaswini the technique and serenity you acquire over the years in a specialty where accuracy, wind, physical conditions and especially the ability to focus on the target with a steady hand can be the millimeter difference between a successful score and one that leaves you out of the competition.

The truth is that the 2020 Olympic competition will feature Tejaswini Sawant and all of India is looking forward to her participation and bringing glory to the country. Tejaswini and the other Olympians sincerely hope that Tokyo and China will be safe by then.