Santosh Kaveri has set a great example of being associated with Modi’s Made In India initiative. The young inventor, who is of 25 years of age belongs to Belgaum, a district in rural Karnataka. He used to live in a hut and his father worked as a farmer. His father wanted his sons to get an education and sent them to a school that was 20km away from home. His father used to earn Rs.35 a day but always ensured there was enough of food.

Santosh Kaveri has won many awards for his achievements which made him realize becoming a full-time social entrepreneur. He faced failure in the starting of his journey while trying to start his enterprise, later he joined as a government employee in Karnataka. In his initial days, he was not even aware of the terms like innovator and entrepreneur but his bitter experience taught him well. Those days, it was tough to get investors in rural innovations due to fewer target customers which resulted in fewer profits.

TATA, his all time IDOL

On asking about what he wanted to become since childhood, he always thought to do something different. Santosh wanted to become the one to create jobs for everyone else and the inspiration behind it was Ratan TATA. Till then he did not know TATA except for the vehicles he used to see in his villages were made by TATA and also noticed the TATA painted behind every truck. This raised his curiosity to know more about TATA. Santosh very well understood the vision of TATA who knew the want of villagers. He also wanted to become one like TATA. During his school time, the vehicles he was taught about in noise pollution chapters were never even seen by them.

From the start Santosh was clear with his thoughts that he wanted to work in the agriculture sector. He started living with his grandfather and working on his farm to learn more about the problems faced by farmers. He used to clean the sheds and wash bulls and buffaloes owned by his grandfather. All this never made him tired but rather made him feel more energized.  He loved every bit of his new found love with the animals and the nature. From caressing the cattle to the smell of the cow dung and of the mud. 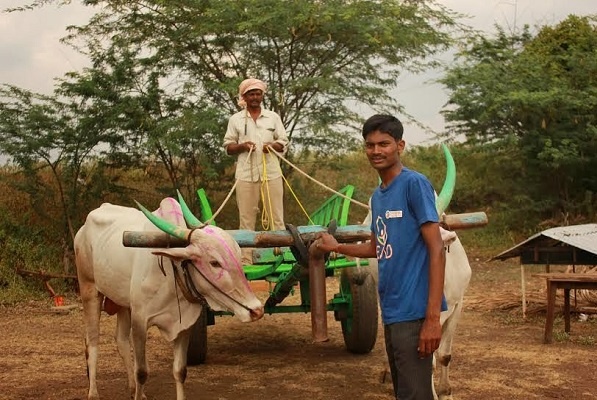 Why is every farmer was so unhappy despite toiling from morn to night ? Why is the suicide rate increasing ? What drives them to take these extreme steps ? Why do the farmers continue to remain poor ? These thoughts constantly haunted Santosh who started pondering, observing and discussing. The real problem was the cultivation of the same produce which resulted in over flooding the market. This was due to lack of alternative produce and marketing skills of the farmer.

After doing his graduation in 2010 his father bought him one acre of land but it was arid and water available was 2km away. Santosh religiously used to connect the pipe and remove it in the evening after coming back from college. Mind you, in return of water supply, he had to part with 20% of his produce. Leave alone the water, the tilling, cattle caring, plowing are tough tasks carried out by farmers without complaining day in and day out. Santosh now could feel and experience the farmers’ woes.

Tons and tons of water is used to clean carrots before they are ready to hit the markets. It is undoubtedly a cumbersome process but there isn’t a choice for the farmers. Can something be done to ease the process was Santosh’s concern. After much thought Santosh felt a simple machine connected to a kick-start scooter could be the answer.

Santosh’s family was quite exasperated by the way the innovation of the machine was going with loads of carrots being wasted in the process. Not only carrots but money and time and had almost given up.

But an innovative mind never stops. At the unlucky 13th time modification Santosh was successful which was more than a year-long of hard work. This machine rotates for 15 minutes producing shiny carrots in return. 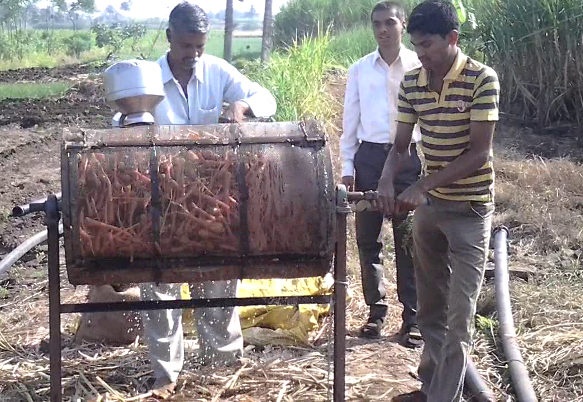 Santosh was doing his BBA from SSS Samiti College of Business Administration in Belgaum. It was Deshpande Foundation under their LEAD programme came looking for innovators and this Carrot Machine was chosen for the award. The award was given by none other his IDOL Ratan Tata and till today Santosh cherishes this precious moment. Parents who were exasperated soon started feeling proud of their son when they saw him on TV. 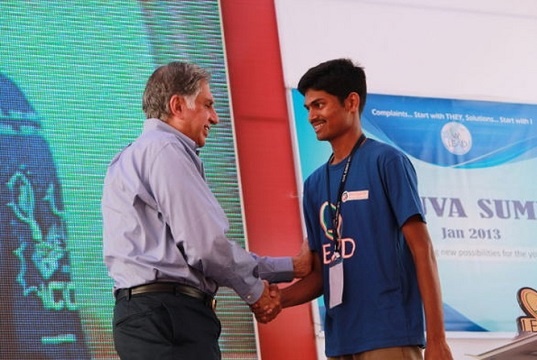 It wasn’t difficult for the market to see the shiny carrots and the orders for the machines steadily increased.  In order to fulfill the demand he took advance and sold almost 200 machines in his village.

In 2015, he won the state award for the carrot cleaning machine from the then chief minister Siddharamaiah. Then, in 2018,

from the Vellore Institute of Technology but got no support from politicians. He is still struggling for getting money and marketing techniques to take his idea further but he takes it as a learning experience.

Santosh got his second award for best LEADER  from the Deshpande Foundation for innovating a brake system for bullock carts which was presented by N R Narayana Murthy. 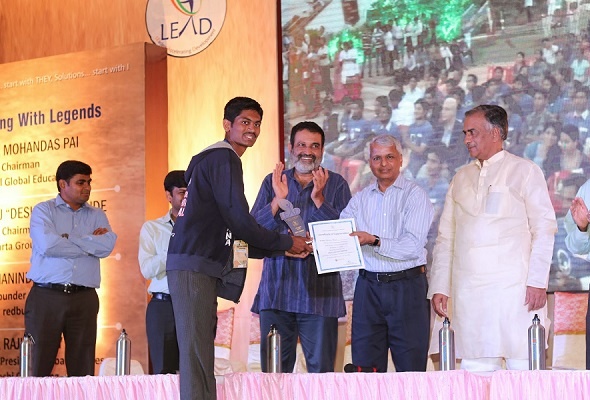 The idea for this began while seeing the pain and strain in bulls who used to carry bundles of sugarcane in hilly regions for transporting it to factories. The drum brake attached in the wheels which were connected to the bull used to help the bulls in slowing down. The control of rein was in driver’s hand. The problem was, no owner was ready to invest on their bulls so Santosh took one year in meeting them but found no results. He knew he had to show them practically to convince them of buying these.

This is the plight of the innovators in the country where not much help comes either from the government nor the investors. If the Make in India initiative has the work a lot more needs to be offered to the innovators who work tirelessly.